The AE Hackathon gives customers and prospects 36 hours to come up with an innovative idea and a minimum viableproduct. The fifth editionof the Hackathon took place in June 2018. In this series, you will meet all the participants.

With the slogan "feeling good works great", Attentia is fully committed to the well-being of employees by combining their social secretariat with prevention and protection. As such, the organisation wants to give companies a better insight into what makes a HR & wellbeingpolicy successful. For the Hackathon project, Team Attentia started out from the observation that the remuneration and evaluation policy within a company has a significant influence on employee satisfaction. 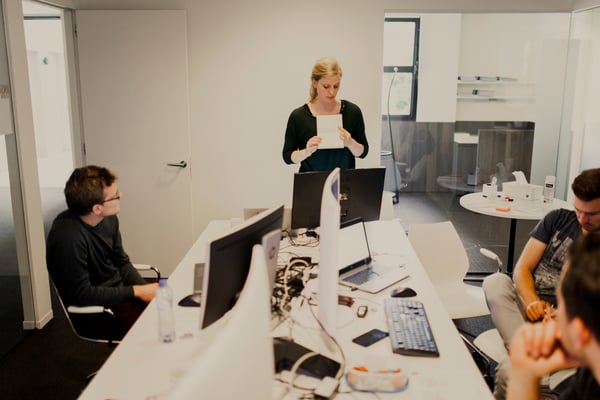 The Hackathon's definition of the problem

In many large companies, there is a significant gulfgap between managers and employees. As such, discussions on salary and growth possibilities remain rather abstract. The result? Remuneration follows an ambiguous process which depends a lot on subjectivity. Moreover, both managers and employees are disadvantaged in such a state of affairs: the high number of performance interviews that managers need to conduct prevents them from giving their full attention to core tasks. Employees, in turn, become frustrated, because their value is determined by one subjective interview.

SmartReward attempts to break open these centralised hierarchical structures by also allowing the teams themselves to decide on growth opportunities. Specifically, SmartReward transforms the evaluation process into a peer-to-peer-system in which employees can reward each other with badges for their performance. Indeed, research has shown that regular feedback from direct colleagues contributes to a more objective and transparent picture of employee performance. In addition, the involvement of team members leads to greater general satisfaction on the work floor. Of course, the question is how to make such an evaluation system sufficiently uniform to be able to draw objective conclusions from it. Team Attentia chose a solution with smart contracts, in which certain rules and conditions can be programmed. By making these as specific as possible and applying them to the case, the team rapidly developed a minimum viable product. Thanks to Blockchain technology – which in the first instance is a system in which you only record data - every badge that someone receives is also immediately written down. As such, not only did the team create a transparent and traceable overview of the various evaluations that makes fraud impossible, but also one which protects the integrity of the employee.

After 36 hours, Team Attentia were able to present a working application. SmartReward eliminates the distance between the employee and the person evaluating them, makes the process more transparent and reduces the subjectivity of the entire evaluation process, thanks to the input from various angles. That way, the full performance management gets an efficient upgrade, as managers and the HR team can once again focus on their core tasks. With a simple solution such as badges that colleagues can award to each other, Team Attentia has been able to motivate and engage teams even more, so that they gain more trust in the organisation where they work. Trust that will increase retention within the company in the long term.