For finance companies that often execute international payments and transactions, it’s worth looking at Blockchain, a technology that simplifies the payment and transaction process significantly.

Let’s dive a little deeper into the advantages of implementing Blockchain.

To get a good view on the advantages of using Blockchain, we need to know what the transaction process looks like precisely. Here’s how it works:

Every bank – or any payment service provider for that matter – keeps a record of all of its own payments, transactions and funds in its centralized database systems. These records are kept up to date using messages received from other parties involved in the transaction execution process.

To be able to effectively execute a transaction, the bank has to communicate with the central clearing and settlement authorities of the currency they want to exchange. This may imply that several parties are involved in the transaction process.

Each ‘participant’ and central authority have their own cut-off ties. This means that a certain process participant won’t be able to execute his part of the job on the same day if he hasn’t received the proper instructions before his cut-off time.

Each participant also charges a fee for their part in the process. 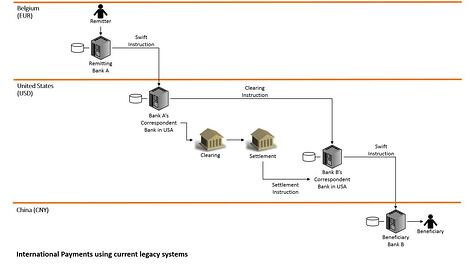 The above image exemplifies the process of an international payment from Belgium to China. Because currency always needs to remain within its own jurisdiction, this payment first has to go to the US where it needs to pass the American clearing and settlement systems before proceeding on to China. Such a payment can take days or weeks to complete, independent of the amount involved, and result in over 100 euros of additional costs.

What is more, if something goes wrong in the communication between the parties (yes, this happens) a payment may take even longer to complete. And for the bank, figuring out what went wrong exactly is a very labor-intensive and expensive job.

The transaction process can be simplified greatly using a technology called Blockchain. What does this entail precisely?

It can be said that Blockchain is a distributed database in which information is stored in a decentralized scheme existing of a virtual participant network. In our transaction context, Blockchain can be seen as a decentralized ledger containing all transactions ever between the network parties.

This is made possible by creating chains of transaction blocks, which is where the name ‘blockchain’ comes from. Here’s what that process looks like:

A transaction is first defined and encrypted using a digital signature. In its definition, the sender, the amount and the receiver are defined.

Next, the transaction is encrypted and authenticated by the network.

In the following step, all transactions are collected into a block, which simply put comes down to an update of the transactions ledger. At a set point in time, this block is put up for validation with the validating members of the network.

Lastly, the block is chronologically chained to the rest of the blocks and sent out to the whole network.

What's the difference and what are the benefits?

The main difference with the current modus operandi is that transactions are stored in a shared database and that they can no longer be altered by anyone. As such, balances are always up to date and it’s no longer necessary to send messages back and forth to update your own databases based on that information. It’s virtually impossible for a payment/transaction to go lost or get stuck somewhere.

Going back to our example, this means that our dollar payment from Belgium to China takes mere seconds instead of days or weeks. Because the whole process takes place quickly and automatically, there are almost no extra fees attached either.

The blockchain process as outlined above only describes the main principles. For true international payments to become possible using this technology, real solutions have to be developed and implemented.

A solution to execute international payments – and one in which the sector is particularly interested – is to have a consortium of financial institutions set up a private network in which the role of each participant is determined contractually.

Such a solution requires the following roles: ‘regular’ participants, who can only receive or make payments, participants that have the contractual authority to validate, and the gateway and marketmaker participants.

The gateway participants are institutions that create a digital value for a certain currency which can then be used for trade within the network. They keep the equivalent of the currency as security at the qualified central bank (here: the European Central Bank or ECB). The marketmaker participants are the Foreign Exchange (FX) companies that trade in the digital versions of the various global currencies.

For our Belgium to China example, this means that for this specific transaction in the network the digital versions of the euro and yuan are being traded. The marketmaker with the best conversion rate is automatically selected and the transaction is executed within seconds without the interference of the central authorities.

With this blog post, I hope to have been able to shed some light on the potential of using Blockchain. All of the players that play a crucial part in facilitating or executing payments (like SWIFT or VISA) are already experimenting with this technology.

Effectively integrating a Blockchain-solution within the legacy system landscape of banks or payment service providers is not challenge-free. If you have any questions on the matter, do let us know. 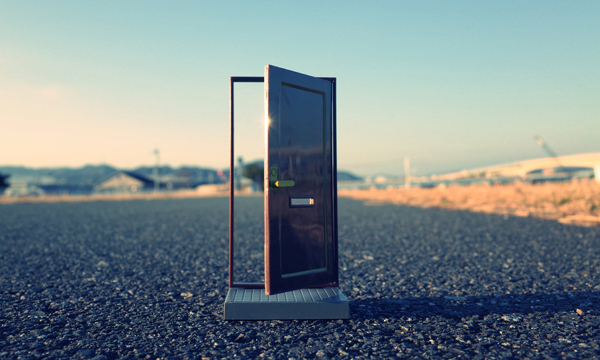 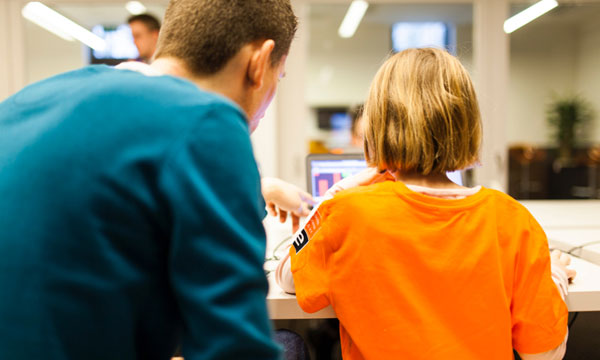